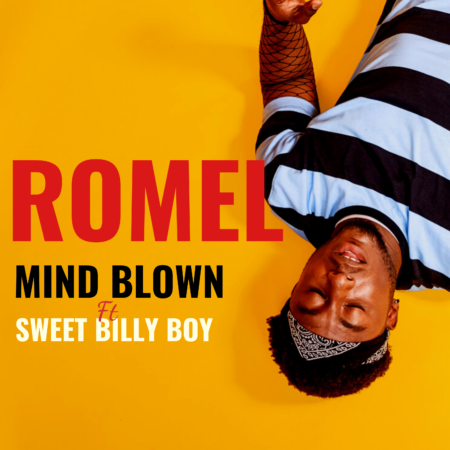 And his latest single

“Romel is an artist who has a unique approach to his sound” – Band Camp Diaries  Having played to sold-out clubs in Coventry, whooped up the crowds on the floats at Notting Hill Carnival and recently supported Burna Boy, UK based Grafton Entertainment afropop artist Romel comes with his latest release, Mind Blown featuring Sweet Billy Boy.

Once the track was

On the making of the track, Romel says “I was not meaning to write a song like Mind Blown but it just poured out of me in a wave of positivity. This was after spending a fair few years of not working with the right teams, but then things started to go really well, and working with Slic Vic was part of that transition.

The spontaneity is really infectious and at this point in time I’m in a really good space with the songs flowing nicely”.

Mind Blown is Romel’s fifth single release and follows three singles from last year: Tonight, Summertime and Paradise, which between them, picked up strong support on UK regional stations plus rave reviews in Flava Mag, Vents and other online publications.  Raised in London and of Nigerian descent, Romel started his musical journey rapping at various open-mics and studio sessions, until a producer heard his voice and suggested he sing instead, changing the course of his style completely. Taking inspiration from the likes of Khalid and Pharrell Williams, Romel eventually started working with Grafton Entertainment and toured Nigeria with Grafton & MTV Base Africa alongside artists Mr 2Kay, Ill Bliss, Tha  Suspect and Jaywon plus MTV Base presenter Ehiz. Otherwise Romel has also featured in videos for Davido’s hit song IF (which won Best Pop Single and Song Of The Year at Nigeria’s Headies Awards), Wondering by Mo ft. Chip plus Chicken Curry by Mr Eazi ft. Sneakbo & Just Sul.  Outside of music, Romel appeared in Bengali movie Bhaijaan Elo Re, which was the fastest Benghali movie soundtrack to hit a million views in 24 hours. He’s also had cameo appearances in the short film Lucid, plus the BBC comedy show Famalam.

The year 2020 looks to be the best one yet for upcoming pop artist Romel. Be sure to follow his socials for updates and prepare to be erm… Mind Blown!